The game starts two years on from Mass Effect, for those who loved the original game, the opening scene was jaw dropping and completely unexpected (unless you read the spoiler blogs - I will endevour not to do this with this review).

The game starts with Shepard being woken up and immediately fighting for his life, to me this was great, very little in the way of managing any conversations, just straight into the thick of the action.   Quickly the game pulls you into the intrigue of working along side Cerberus under the control of the Illusive Man, is there a hidden agenda going on or not?  Is Shepard a puppet to the Illusive Man or does he genuinely need him?  the crew that you meet initially, do they have your back or are they likely to put a knife in it.  Whatever your initial thoughts the intrigue is tremendous and will keep you guessing right to the end of the game .... and probably into the final installment when it is released (at the time of writing this, that will be quarter one 2012).
Intelligence reveals that colonies of humans are disappearing without trace, the fragmented Alliance think Cerberus is behind it, Cerberus thinks it is something more sinister, something that will threaten the entire galaxy, your initial task is to find out what that threat is. 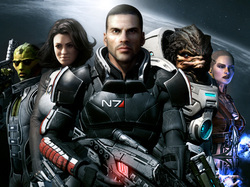 Having ascertained what the real nature of the threat is, you are given the details of a variety of characters that can help you with the final mission, so throughout the game you must find these characters and gain their loyalty, gaining their loyalty requires pulling off sub missions.  What impressed me with Mass Effect 2 is the need to make key decisions in this game which may or may not make your life easier during the game but these very same decisions may or may not do you any favors on the next game either .... deep huh!!  Keep this in your mind when you make decisions between backing an individual over their race, or capturing enemy equipment for research, will it bit you in the ass in the future?  This to me is the true nature of the game and the real value of the game, you never are really sure whether or not the choice you have made is the right choice, but hey, we'll all find out at the end of Mass Effect 3.
The balance of interaction and action is good, as much as I liked the idea of manually scanning planets for minerals (used in researching upgrades) in the end it became tedious, I hope they revert back to the scanning of the original Mass Effect.
Like myself if you are going to purchase Mass Effect 2 well after it was launched, check out the variety of downloads available for the game, not all cost you money and one of them includes an extra character that you can use for the final mission.  What ever you do, don't lose the saved games progress of your character because you WILL need them when Mass Effect 3 comes out - I hope you enjoy this game as much as I have, oh and good luck with whatever decisions you eventually make ;-)