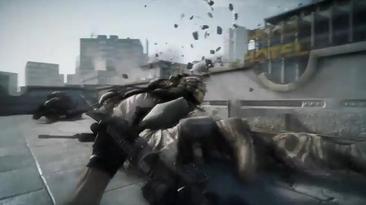 The anticipation of Battlefield 3 was large from my point of view.  Being a Call of Duty gamer for the last 4 years, I was looking for something very different, a new challenge, with a greater variety of ways to take on the enemy, I was especially looking forward to flying the helicopters and jets!!

My expectations were well met right from the start, having pre-ordered my copy from Mighty Ape and it arrived first thing in the morning on the official release date, awesome service!!

Loading the game, it immediately throws you into a scenario based in New York where your character who is obviously on the run, jumps on to a train, and shoots his way into the train, taking out a whole host of bad guys ............

The game then takes you back in time where your character is being interrogated by the CIA, the rest of the game plays out in scenarios that your character recollects as part of his interrogation.  The story line is pretty linear and the missions on "normal" level are not overly difficult and does not take a very long time to complete ........ but then that is not why we buy these types of games, it's for the onliine multiplayer component ... more about that later.  The graphics for this game are incredible, utilising the Frostbite engine, the detail is stunning, from ricocheting bullets to earthquake shaken buildings falling around you.  Your squad are also well detailed, right down to the commands they give each other and the way they move to clear buildings and areas, very obviously well researched.  I use a Turtle Beach headset when gaming, if you have not experienced these headsets, you should go and treat yourself right now, they are premium headsets but you absolutely need them to really appreciate the pure ecstasy of what can only be described as being on the actual battlefield!!  The attention to detail is astounding, there is nothing more terrifying than making your way through an area when you hear the very distinct "crack" of a sniper rifle followed almost immediately by the thud of the bullet near by, it WILL make you duck on the sofa!!  The rumble of the tanks and the roar of the engines of a jet fighter overhead just add to the immersiveness of the game.

That takes me to the only real negative aspect of the game for me, as I said at the start of this article, I was really looking forward to flying around blowing everything up from the skies, imagine my disappointment when I only got to do was fire some rockets and rounds from the co-pilot's seat of a jet fighter and didn't get to fly a helicopter at all ..... how the bloody hell was I supposed to practice my flying skills before going on line!!!   What were the developers thinking, since when did anyone ever get to just "practice" in a multiplayer online environment!!  (more about that later).